Hola a todos. This fair is annoying me, and I didn’t even go.

What are females doing up on the stage for a gay men’s sex club (I won’t have it!), specifically Berkeley’s Steamworks? WTF is that about? Mi amigo/My friend said he had never seen this before on the stage of Steamworks. The people on the stage were playing Twister, or that’s what it looked like. Steamworks — in Berkeley California across the Bay from me in San Francisco — is a private men’s gym, sauna, bathhouse for men 18 years and older. I thought maybe Steamworks had changed to straight like everything else seems to have done! So I looked it up. No, Steamworks hasn’t changed to straight, fortunately. It’s still for gay men, not females. In fact, it’s the only gay men’s sex club in the East Bay of the Bay Area. Females don’t go there. So again, WTF were females doing on Steamwork’s stage? I realise this is the Century of Insanity, but really! And were they lesbians or straight females on the stage for a gay men’s sex club? There were some guys on the stage along with the females, but that gave the impression that Steamworks is a straight club with the addition of females. What’s next? Seeing gay guys on the stage of a straight sex club, promoting straight sex at that club? [SCREAM!] Watch your blood pressure, pink barrio. You can’t get worked up over this heteronormative shit that you’re seeing wherever you look that you have no control over.

Then over there by the bathrooms according to mi amigo who went to the fair, the first thing he saw was a heavy breeder/straight passionate telenovela-style make out scene. Him and her. Him and her had to come to a queer fair to make out. You can’t make this shit up! But that’s the New Straight San Francisco for you (the Breeder Mecca). The Folsom Street Fair is a queer fair, or it’s supposed to be. Not a hetero fair. These fucking heteros want it all. They can go to any other fair on the planet and make out and nearly have sex right there in public since they own the world. If queers did that you know as well as I do what would happen to us. Can’t they give the Folsom Street Fair to the queers since we’re the ones who started the Folsom Street Fair to begin with? Breeders didn’t start it. This was our thing. They’ve taken over The Castro and now they want the fairs. Like I said, they’re never satisfied. They want it all. The assholes.

And what’s with all the fucking lesbians there? Mi amigo tells me that the lesbians invaded sometime ago — I wasn’t aware of that — so I presume their pussy stench and that obnoxious smell of estrogen has been thickening ever since. I’m sick of this shit. This complete heteronormative take-over which includes lesbians trying to look like straight women, which I wrote about some time ago. Some older lesbians online have complained that these days they can’t tell who is a lesbian and who is straight woman. When I wrote that article, I remember reading that some lesbians are going to straight bars to try to pick up females. Then when a straight guy hits on them (in a straight bar), the lesbian gets offended. WTF are you doing in a straight bar, bitch? Loca. 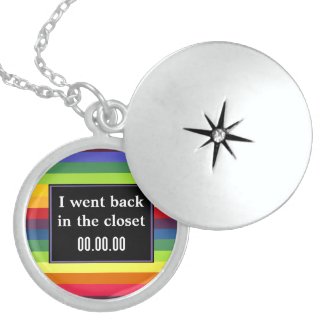 This ought to be a huge seller
considering all the closet cases
we see today. They’ll probably have trouble
keeping it in stock.

Then if that wasn’t bad enough, you see obvious queer boys — according to our extremely reliable gaydar — with females at the fair as if they are a breeder-straight couple with some making out as if Mr Queer Boy has gone back in the fucking closet, which seems to be some new head trip fad these days. (roll eyes) Insanity. That seems to be part of that “Gay Assimilation” head trip where we queers were ordered by the busy-bodied corporatist queers among us to “assimilate with the straights” when gay marriage became legal in the non-United States. (Related: Gay Assimilation Has Backfired and Gay “Assimilation:” Back to the 1950s and What’s the problem with GLBTQ “assimilation?”). Personally, I was already as “assimilated” with the straights as I cared to be. But unfortunately, many queers consciously or unconsciously interpreted that dictate to mean: Go back in the closet and be as much like the straights as possible, including getting a girlfriend or wife and breeding, along with getting into corporate sports teams and wearing a baseball cap which will instantly make you Mr Macho Jock Bro. From what we’ve seen, the “Gay Assimilation” thinking seems to be: Having gone back in the closet, your family will now be very proud of you that you are now “straight” and “normal” and no longer a “faggot.” And there’s no shortage of gay shame these days considering the over-saturation of the word “discreet” and “down low” that one sees gay and bi guys using to describe themselves. Can someone remind me again as to what our Movement accomplished? It seems damn little in the big scheme of things, I have to say. I should point out that “discreet” is the opposite of “Out and Proud” as queers were during the Queer Movement. “Out and Proud” today? Where? Not in closeteted San Francisco, I can tell you that, with few exceptions. The same is true for closeted Manhattan. Today it’s all about discreet. “Discreet” is another word for closeted with gay shame, along with trying to be clones of the straights. Who put the straights up on a pedestal to be modeled after with their dysfunctional relationships (as of 2017: 1 in 4 breeder couples marriages are likely to end in divorce in the US) That pussy must not be all that hot and appealing since he’s willing to let it go by divorcing her. He can’t take any more of that female; he can only take so much!

And where are the young people? Where are the young queer boys? They’re not coming to this fair nor are they coming to The City anymore. Maybe they know of a place where it’s all queer the way it used to be and they know that San Francisco has been invaded and taken over by breeders, and lesbians trying to look like breeders.

Someone might ask: What do you have against lesbians? I don’t know that we have that much time! There was a time even up until recent years where I had nothing against lesbians. I got along well with most of the lesbians I worked with or had any contact with over the years. I really never thought that much about lesbians to tell you the truth, until I saw what they did. But that changed when I saw them move themselves to first place in that “LGBT” acronym (notice they leave off the Q; what do they have against Queers?) which one sees spammed all over the internet — it used to be and should be GLBTQ — because lesbians didn’t do most of the work of our now-dead Gay Rights Movement. Gay guys and trans individuals led the Movement and did most of the work. Not lesbians. So I watched as lesbians hijacked our Movement by giving themselves all the attention, moving themselves to first place in that revisionist history acronym (Related: Lea DeLaria: The LGBTQIA+ acronym is divisive) and they have been riding on the coattails of it ever since. Self-absorbed, self-entitled assholes. Lesbians reaping the benefits of the hard work of gay guys and trans individuals. With few exceptions, all the lesbians did was to sit on their hogs and light up a cigarette. So I have resentment and very little use for them today because of their dishonesty and revisionist history of our Queer Movement, their neediness, their self-entitlement in hijacking our Queer Movement. And today, lesbians are more accepted in society than queer boys because the public sees lesbians and says, “That’s what girls do” especially when the public sees two females kissing and holding hands. When they see two queer boys kissing and holding hands, they’re called “faggots.” Reminds me of when Sta*bucks put the picture of two females holding hands on their holiday cups. Someone wrote to them and asked when might we see the hands of two guys holding hands. Silencio/Silence. Not. About. To. Happen. Period. See what I mean?

During the Gay Mecca years, it used to be in my area of The Castro that the only voices I heard outside my apartment were quiet voices of gay guys walking by. Today? It’s a parade of “Him and Her” and her obnoxious loud, shrill voice trying to get attention from anyone who will give Ms Needy attention. Needy Her. There’s also the continuous flow of screaming children as well as babies in black baby strollers, (it seems to be a requirement that all baby strollers today are black). These new “Him and Her” residents moved to San Francisco to breed apparently. There are a few queer couples around me who are still here but most are snotty, but at least they’ve not gone back in the closet.

I saw pictures of the fair and that was enough to turn me off. I know if I had gone, I would have had blood pressure problems because this fair is no longer a queer fair. Although near the end, mi amigo said it was mostly queer because the breeders and lesbians had left because of the heat. It was like a sauna.

There was even a booth there with purses and women’s attire in it. Now WTF is that doing at a supposedly queer fair? Unless that was catering to the over-saturation of lesbians who have taken over everything as well. I was going to say the women’s stuff might be catering to Drag Queens but I don’t know that there are any Drag Queens any longer.

On his way to the fair, mi amigo got to the Castro Street Metro Station and heard 2-3 guys say, “I don’t think this is going to be very gay since no one is here.” Mi amigo said that the fair was noticeably straighter, but that queers were still in the majority, although the pictures we saw on a local corporate site didn’t reflect that. He did say that the breeder couples, tourists and lesbians left early leaving more queer guys, and that each year the females leave when it gets real crowded and hot because they don’t like rubbing up against sweaty guys and the “smell of guys.” Oh, the “smell of guys.” That sounds hot to me. Maybe I should have gone. And there was lots of queer nudity, which seemed to offend the prudish breeders. We really don’t understand this: This event is advertised as a clothing-optional event. There has always been nudity at the Folsom Street Fair. The City’s ridiculous nudity ban does not apply to this fair. Yet, multiple times, mi amigo said he saw immature prudish breeder couples giving disapproving looks and covering their eyes with their hand as they walked by gay nude boys as if they couldn’t bare to look at a soft dick. Why the fuck were the prudish breeders there to begin with with such sexual hang-ups? These breeder couples didn’t have the maturity to appreciate or look at the nude human body. Had it not occurred to these assholes that they were at the wrong fair, and what made them want to come there to begin with? Clearly this fair was not suitable for their puritanical and prudish mindset. To them I say: Fuck off and go to another fair. Chau.—el barrio rosa