Stupid people want to know.  And stupid is rampant these days, especially in the US.  For those who don’t know, the District of Columbia is the official, formal name for the capital of the United States. When one is crossing la frontera/the border from Maryland (or Virginia) and going into the District the sign reads: “ENTER DISTRICT OF COLUMBIA. LEAVING MONTGOMERY COUNTY.”

Hola a todos. The District of Columbia now has to cater to our failing education system here in the dis-United States.  As a former resident of the District, I was sorry to hear about this. The DC DMV (District of Columbia Department of Motor Vehicles) recently made the decision to change the name on District driver’s licences from the City’s formal-official name, District of Columbia, to the name that the stupid-is-in sheeple are more familiar with: “Washington DC.” Ugh. Sigh.  How many people who say, “Washington DC” know what DC stands for?  I suspect most people don’t.  They just mindlessly say “Washington DC” because that’s what they mostly hear from the corporate media.  For the stupid people, DC stands for District of Columbia.  Now I can hear someone asking, “What’s that?”  (This article is beginning to feel very repetitive, but stupid people need repetition to grasp things). 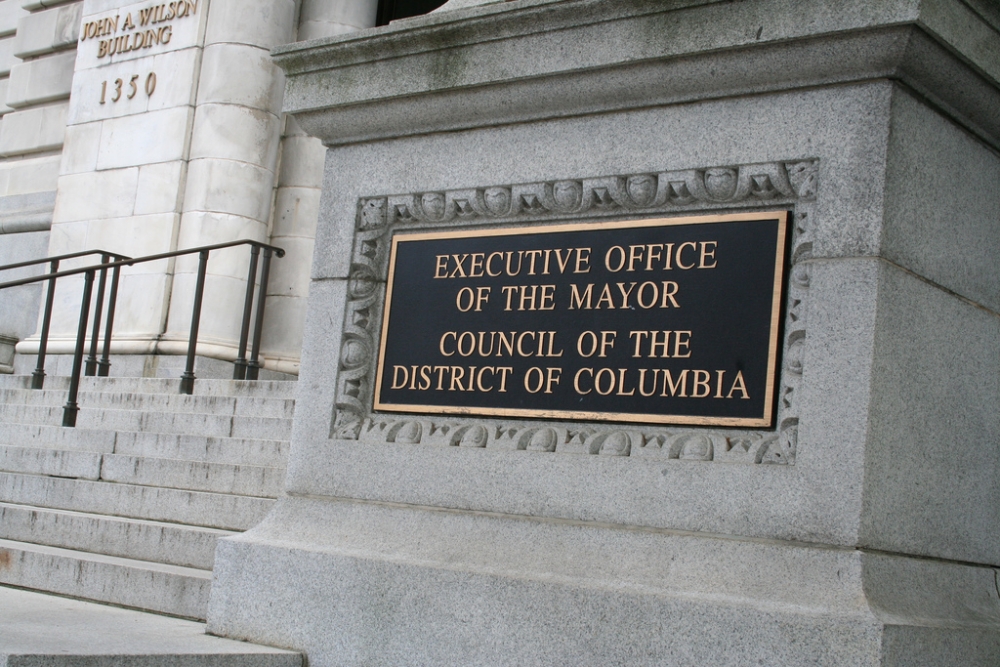 The reason the DC DMV is making this change is because “stupid is in” and too many people in US don’t know much or any US geography these days or anything else for that matter! Many District residents have had problems when travelling around the US due to ignorant TSA agents, ignorant airline personnel, ignorant personnel in car rental companies and ignorant personnel in bars in some US states (such as Florida) not knowing what the District of Columbia is or even where it is! (No, I’m not making this up. I’m serious).

I think to cater to the stupid people — personally I’m opposed to catering to stupid people; there’s no hope for them really and you can’t fix stupid —  the District’s Government had to come up with this below, “We are Washington DC.  Government of the District of Columbia, Muriel Bowser, Mayor” as seen below.  Mayor Bowser should have added:  “The Columbia part does not mean that we are part of South America.  That Colombia is spelled differently.  Understand?  Don’t you hate stupid people where you have to explain all this stuff to them?:

Apparently G**gle thinks people are too stupid to know what DC means so Google refers to the District as “Washington, District of Columbia.”  They should add “which is in the US; it’s the nation’s capital.”

Stupid people in the US have been asking DC residents after looking at their driver’s licence:

“Is the District of Columbia in the United States?”

(Oh good lord. What is wrong with people? Is there something in the agua/water?)

Other stupid people confuse the District of Columbia with British Columbia.

Other stupid people confuse the District of Columbia with the country of Colombia (note the difference in spelling) in América del Sur/South América.

WTF has happened to our education system in the US?  Or are all of these people supporters of the stupid orange white house occupant?

Most people seem to have heard of “Washington DC.” They’ve got that far, maybe only because that’s what they read and hear from the corporate media. But apparently our education system here in The Cesspool has never explained to these stupid-is-in people what DC means.

What do they think the “DC” part stands for? Apparently these ignoramuses were never taught that the Federal District known as the District of Columbia (DC) is not a state and the District is an independent territory and independent of all the states and it is the seat of the US government? There are stupid people in the US who do not know that DC is the capital of the US. 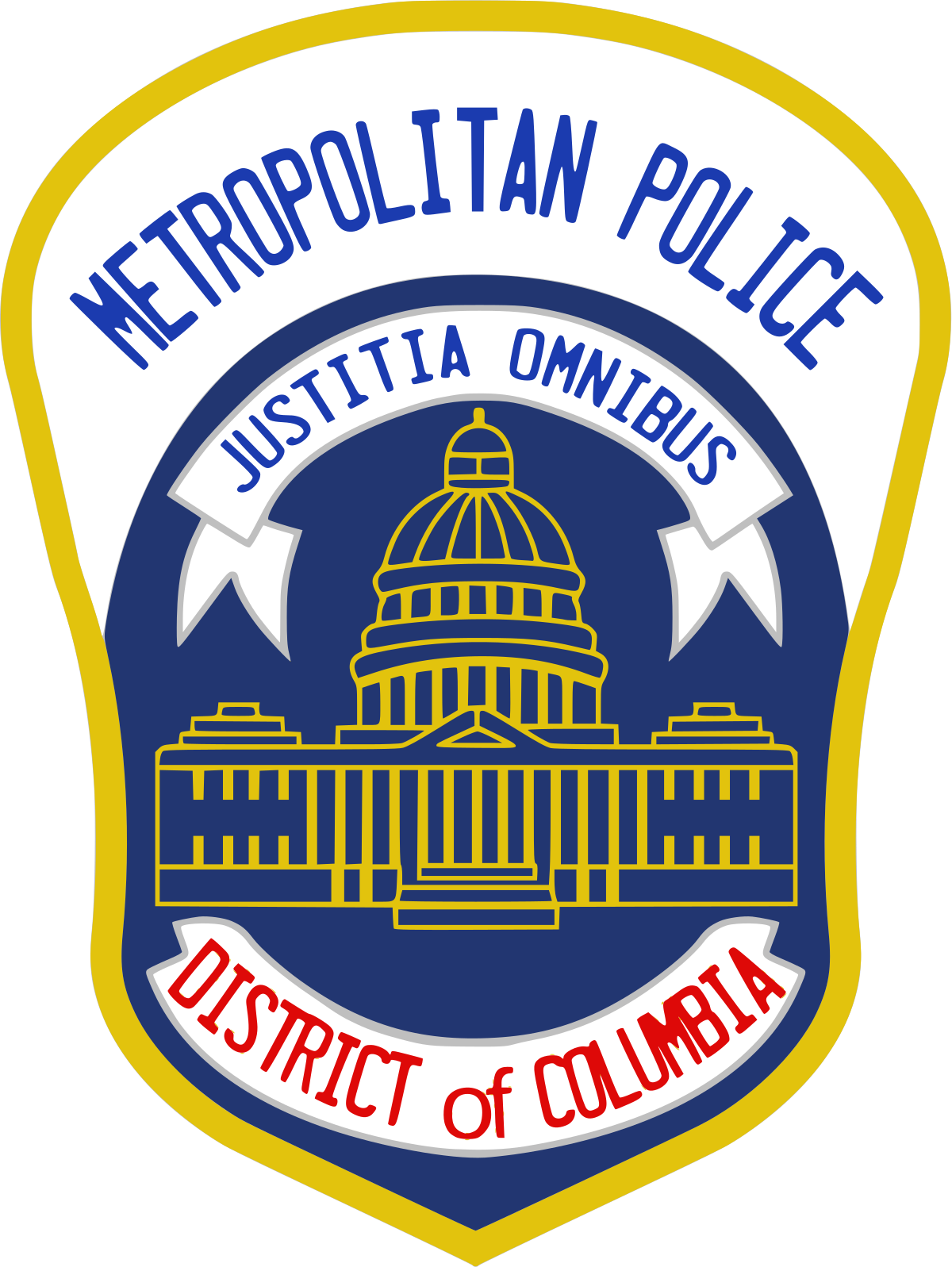 I think that the national corporate media talking heads based in the District are told to call it “Washington DC” because the idiots in their audience won’t know what they’re talking about if they don’t. But I have heard on occasion some DC corporate media news commentators when speaking “live” to a national audience say, “there’s a plane flying over the District so I’ll have to wait a moment for that to pass.” 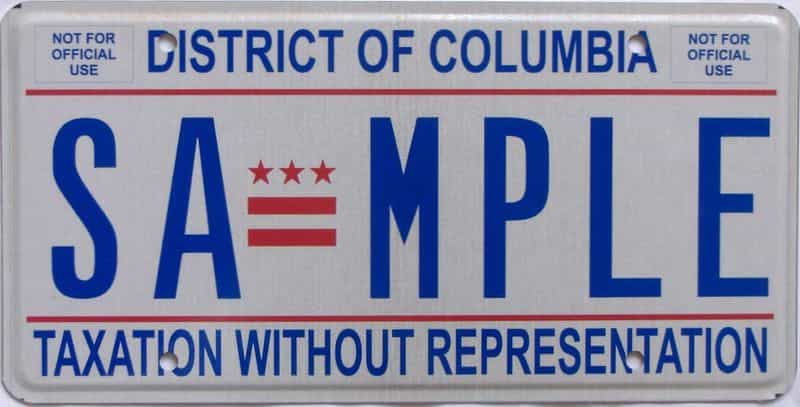 Does the current white house occupant know that he lives in the District?  I doubt it.  He’s as dumb as they come.  The only words I’ve seen him tweet — since I can’t stand to listen to him and his word salads — are “Washington DC.”  I did hear his former spokesliar — that chronic liar that went by the name of Sarah; did she ever tell the truth about anything? — say in a studio interview to the host she was being interviewed by, “Welcome to DC.”  I thought:  Well that’s more than her boss knows, assuming she knows what DC stands for, which I suspect many people don’t know.  And if one tried to explain to her deranged and insane boss that there is no “Washington” in “DC” that would go right over his head.

Here are some experiences from District residents with their current District of Columbia driver’s licence:

One District resident said she had trouble getting her marriage licence because the clerk in one of the southern US states (you might know it would be a southern state!) didn’t know what District of Columbia was. So the DC resident said she patiently told the clerk, “put Washington in the city name on your form and put DC in the state name.” The clerk asked her: Is that in the US? The DC resident responded: Yes, Ms. It’s in the US, in fact it’s the capital. (So in that instance, this clerk didn’t even know what Washington DC is or where it is so changing the driver’s licence and the licence plates to “Washington DC” wouldn’t help her at all!)

A few years ago, I took a trip to South Florida. While there:

-Bars would not accept my DC licence as valid;
-A car rental company refused to accept my DC licence, causing me to rent a car with another company;
-On the return trip, the TSA screener thought I was some sort of legalized national. It took four TSA agents before one of them knew I was from DC. That’s to say, it took 4 TSA agents before one of them knew what “Washington DC” was. I don’t blame the DC licence: I blame our rapidly declining education system in the US.

“At a DMV in California, the guy didn’t know what the District of Columbia meant. I told him it was the capital of the U.S. He didn’t believe me. A supervisor had to confirm this for him. I fear for our country.

Another commenter said he had similar problems with TSA agents at Boston’s Logan Airport. They also didn’t know where the District of Columbia was either.

But this stupid-is-in fad is not limited to DC. A resident of New México wrote (edited slightly for copyright purposes):

This problem is not limited to DC. I’m from New México. I can’t tell you how many times people don’t realize that New México is a state in the US. Before the 1996 Olympics in Atlanta, resident of New México were trying to buy tickets for the Olympics and they were told to call their embassy. So in an effort to try and educate stupid people, the New México licence plates now read: “New México USA.”

Oh lord. And unfortunately the dis-United States is getting more and more stupid by the day as people are standing in people’s way buried in and laughing at their adult pacifier (their phone addiction). I wonder how long it will be before the stupid people among us won’t know what “the United States of America” is?

Stupid is in and sounding stupid is in: Has Everyone Overdosed on “Like” Pills?

As regular readers know, I’m rarely surprised by anything having “seen it all.” Not much phases me. So I’m not at all surprised by the deep level of stupidity here in The Cesspool. I’ve experienced it myself too often. I hear it in San Francisco on a daily basis when in and around The Castro. It’s as if everyone in The Castro has overdosed on “Like” pills. Sounding intelligent is out. Conforming and sounding stupid (saying the word “like” as often as possible) is in to be part of the herd and part of this sad and shallow US Pop Culture. In The Castro, the dominant word in people’s extremely limited vocabulary is “like.” Like, like, like, like, like is what one hears. And some people say the word “like” so quickly that it comes out as “lick.” It takes people around here forever to say anything because of the repetitive use of “like” in their speech. They sound tongue-tied and illiterate and “up talk” where they make their statements sound like questions. For example, “Hi, I’m Sarah?” Are you? I don’t know. And there’s not a chance you’ll hear a complete intelligent sentence from the basura around here. Complete idiots best describe how most of the people in The Castro sound today based on how they speak. Mi amigo wanted me to add: The people around The Castro can’t have a standard/typical conversation anymore because their brain is so focused and obsessed on where to put the word “like” throughout their sentences, so they stall and say “like” a few times in a row, before getting to the next word of importance having to do with the subject matter they’re trying to express. Quite pathetic really. Chau.—el barrio rosa

One comment on ““Is the District of Columbia in the US ?””