Hola a todos. Despite the epidemic level of gun violence here in the US, presumably the management of the National Symphony Orchestra (NSO) — whose home is the John F. Kennedy Center For The Performing Arts located on the banks of the Potomac River in the District of Columbia (the District) — doesn’t feel there’s yet enough gun violence here in the US, so they want to help things along.

The NSO’s Summer home is out at Wolf Trap Farm Park For The Performing Arts in Vienna, Virginia, outside the Capital Beltway. Fortunately, when we (the University of Maryland Chorus) performed the Berlioz Grande Messe des morts (Requiem), Op. 5 at Wolf Trap with the NSO there were no “shoot ’em up” films or gun-violence scenes being shown on a screen on stage. Nothing like that was promoted in those days. Showing gun violence would have been unimaginable and considered beyond “vulgar” and highly inappropriate and in extremely low, poor taste for a concert hall setting.

Well, that was then. That just shows to what level this country has decayed. Since then, our society has deteriorated tremendously with daily gun violence and dysfunction, and The Empire — serving as the world’s police — bullying and threatening countries around the world to follow US dictates. Our society has been stupefied and dumbed-down considerably. Today, the paying dumbed-down sheeple require instant-gratification with gun violence scenes to satisfy and pacify them. They find watching violence a form of (sick) entrancing and additive “entertainment.” Can’t take their eyes off it when it’s on a screen in front of them. Absolutely mesmerised by it. Watching violence is “fun” it is? Yes, to many it is. Many people get some sick thrill out of watching people get hurt and/or killed. And some of the musically-illiterate sheeple I’m speaking of probably don’t know a violin from a flute when they see it in the National Symphony Orchestra. I can hear it now from someone in the audience at Wolf Trap: “Is that a guitar — pointing to the principal/first chair cellist — like what I see in the praise bands at my holy-roller church?”

And some people still wonder why the US has become such a violent society? I’m sorry to see the National Symphony Orchestra becoming an enabler, becoming part of the problem by promoting gun violence in their programming. Loco./Crazy. Are they receiving any dinero/money from the NRA, by chance?

Here are the details of what the NSO is doing later this month. You can click on the link below which goes to the Kennedy Center website to see for yourself:

“Casino Royale brings us Bond at the start of his career, having just earned 00 status and his license to kill…”

This is the image on the Kennedy Center’s website at that link above: 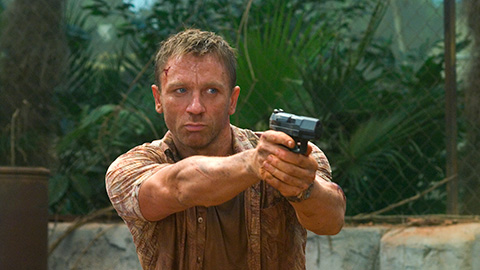 Is that what you would expect to see on the Kennedy Center’s website? (roll eyes)
And note that they say they are “proudly presenting” this. Yes, we proudly present gun violence. It’s just what we need more of! Maybe it will inspire more gun violence in the District, Maryland and Virginia. As of this writing, on an average day 96 USians are killed with guns. By the way, Casino Royale is described as a “PG-13 2006 ‧ Thriller/Action” film.

I don’t have much respect for some orchestral management considering how they disrespect their musicians by demanding they take pay cuts and cuts in their health care benefits while the bougi, elitist and pretentious management with their over-paid exorbitant salaries don’t sacrifice anything. It’s the musicians who people come to hear and see, not management with their over-inflated sense of self-worth. I wonder how the musicians of the NSO feel about performing Casino Royale in concert at Wolf Trap? From my experience with classical musicians they would all oppose this. Classical musicians are pro-peace and anti-violence, including gun violence. It would seem that NSO management are fully catering to the lowest common denominator. I suppose the gun-toting rednecks out in Fairfax and Loudoun Counties in Northern Virginia will especially be attracted to this performance, if they were to hear about it. Hey, it might be the first time they’ve ever been to Wolf Trap or to a NSO performance. How many jacked-up pick-up trucks will be in the parking lot with a confederate flag in the back window with a gun rack and the redneck driver wearing a red “MAGA” hat?

Considering the era we’re quickly heading back to (the 1940s, if not before), I suppose next season one might read the following on the Kennedy Center website:

Depending upon their level of desperation, one wonders if in the not-so-distant future one will see the NSO programming selected orchestral works where they will accompany sex videos — breeder/straight of course, nothing gay, even when many of the musicians are gay — shown on a large screen hanging in front of the organ pipes on stage in the Kennedy Center Concert Hall, or out at Wolf Trap? “An Evening With Kitty?” Programme Note: Water-based lube tubes provided at the door by the NSO. At this point, it won’t surprise me when they start doing that. I guess I just inadvertently gave NSO management an idea they hadn’t thought of. Chau.—el barrio rosa

What happened to the renowned University of Maryland Chorus?

To most people, married still means “man and woman”
The Gay Straight Couple
Is Our Society at Risk of Becoming Gay?
San Francisco’s Castro:  The Baby Stroller Kingdom (December 2019)
Gay Married Couples: Are you wearing your wedding ring on your right hand?
Gay guys are back in the closet and with females.
The Death of San Francisco’s Castro (November 2019)
Contrary to what they say, Queen Elizabeth II is not above politics
TRUMP-PELOSI 2020!
San Francisco:  Do NOT Re-elect Pelosi in 2020